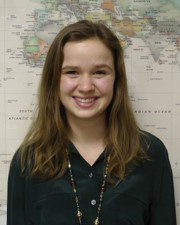 That’s what graduate student Katharine Scott wants to find out. When she started her PhD program in 2015, working in both Kristin Shutts’s Social Kids Lab and Patricia Devine’s Prejudice and Intergroup Relations Lab, Scott’s research led to a discovery of the multitude of forces leading to the creation and perpetuation of children’s biases. In one of her early studies (King, Scott, et al., under review), non-Black children ages 4–6 played a game in which they received help from Black or White players. Helpful players were all members of one racial group (e.g., Black) and unhelpful players were members of the other group (e.g., White). After receiving help from Black players, participants became more favorable toward Black players who helped and those helpers’ Black friends, but not toward unfamiliar Black people.

In other words, while Scott was able to improve children’s perceptions of outgroup members who were directly pro-social towards them in the same, these effects did not extend to the outgroup as a whole. More generally, Scott notes, “one-shot laboratory interventions often only produce effects that are shortlived.” Furthermore, “brief, acontextual laboratory interventions do not help children see the relevance of the intervention in their everyday lived experiences.”

So, what to do? The obstacles were plentiful. For one, children have trouble identifying discrimination prior to 8 years of age, making it unlikely that they could recognize and reduce their own biases. Additionally, even if they could recognize their own bias, young children do not have the requisite self-regulatory skills to monitor and adjust their behavior over time. Long-term interventions, Scott concluded, would require adult assistance.

This, then, is the focus of her dissertation research in which she evaluates the extent to which parents can be trained as interventionists to address young children’s racial bias across situations and over time.

In piloting this project, Scott reports deep engagement from parents and children: “They love the materials that we are sending them, and they are flying through lessons.” After piloting, the full study will be rolled out and run through spring 2021.

“Ultimately,” says Scott, “I strive for my research to have a meaningful impact in the real world. To that end, if my dissertation work proves beneficial, I’ll continue conducting research to evaluate under which conditions my intervention yields positive effects. Following the evaluation, I hope to collaborate with organizations to disseminate my intervention program broadly to parents across the country.”

One organization, EmbraceRace (an online collection of resources for parents, educators, and kids) has already reached out. Familiar with and impressed by Devine’s adult prejudice habit-breaking intervention, EmbraceRace founders Melissa Giraud and Andrew GrantThomas contacted Devine who shared that she was working with Scott and Shutts on research focused on children.

Following a number of conversations with the researchers, EmbraceRace made a gift to the Department of Psychology’s Prejudice and Intergroup Relations Laboratory to help further research focusing on the experiences of children and youth; that gift is currently directed to Scott’s particular research efforts aimed at creating a solid evidentiary base in this domain.

“Given the mission of EmbraceRace to support parents, educators, and other adults working to raise children who are ‘thoughtful, informed, and brave’ about race,” shares Grant-Thomas, “Katharine’s research of course is right on point. More than that, Katharine’s work builds on the only intervention of which I’m aware that has real effects over time (two years!) on the attitudes and dispositions of people who undertake it. That’s huge!”

Shutts and Devine, who work alongside Scott, are excited about the work, too. “Very often when I talk about my intervention work with adults, the conversation naturally moves to a question of why not start earlier, why not work with children to prevent the development of biases?” says Devine. “As it turns out, biases in children are evident at an early age, but the prospect of intervening with the help of parents before the biases become deeply entrenched holds considerable promise for reducing biases that disadvantage members of historically marginalized groups.”

Adds Shutts, “For years, parents have been asking me and other developmental scientists, ‘How should I talk to my child about race? What should I say?’ It’s high time for researchers to devote resources to figuring out strategies for ameliorating children’s biases—especially research that includes parents.”

And who better to lead the way than Psychology Badgers?

To learn more about this project, visit www.katharinescott.com.